Small barge sailed over and sunk 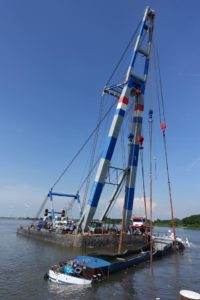 A French barge loaded with approximately 350 tons of fertilizer was on its way from Rotterdam-Botlek to France. On the Dordtse Kil the ship was overrun by an unloaded inland waterway tanker coming behind. The much smaller barge capsized and sank. The crew, a French couple, got into the water and was rescued.

We were appointed by insurers of the inland tanker and were fully involved in the recovery of the vessel. Several recovery companies were invited to submit a quotation, after which a recovery company was commissioned by parties interested in the barge.

With a floating crane, a diving team and other equipment, the recovery was carried out in consultation with the authorities of this busy waterway. After a few days, the barge was recovered and taken to the nearest shipwreck yard.

The value of the vessel before the event was assessed by us and the expected repair costs estimated, on the basis of which it became evident that the vessel was a total loss. 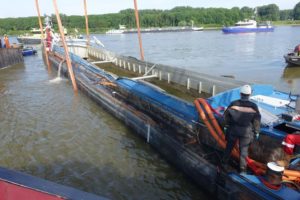